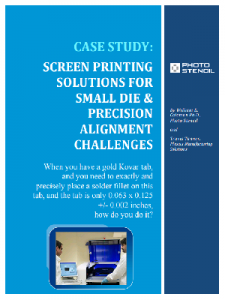 When you have a gold Kovar tab, and you need to exactly and precisely place a solder fillet on this tab, and the tab is only 0.063 +/- 0.002 x 0.125 +/- 0.002 inches, how do you do it? There can be no gas pockets and no voids on the fillet anywhere. Reflow is expected to be perfect. And to make the situation more challenging, the customer is trying to get away from hand soldering and wants to use machine placement. This was the task Plexus Manufacturing Solutions, Boise, Idaho asked Photo Stencil engineers to solve. A uniquely designed aperture shape helped solve the problem.

Plexus Manufacturing Solutions, an electronic manufacturing services company, was trying to print solder fillets on gold Kovar tabs. The tab was very small, just 0.063 +/- 0.002 x 0.125 +/- 0.002 inches, and was plated with 150 micro inches (minimum) of nickel, and then plated with 100 micro inches (minimum) of gold. The solder fillet needed to align precisely with the tab. Reflow had to be perfect. There could be no gas pockets or voids anywhere on the fillet. The plan was to use a stencil and a squeegee to transfer the solder onto the fillet. However, getting a successful plot was extremely difficult.

Previously, Plexus had used hand soldering for this process. In this case, they decided to use machine placement for a more accurate and repeatable result and to speed throughput. After trying a variety of methods and having difficulty producing successful plots, Photo Stencil, Colorado Springs, Colorado, was contacted. Photo Stencil provides highperformance stencils, squeegee blades, thick film and metal mask screens, and tooling for the surface mount technology (SMT) assembly, solar, and semiconductor industries. The stencils Plexus had been using had six apertures distributed over the large pad for the Kovar tab (slug). Using this configuration of apertures to print the solder paste did not allow sufficient solder paste solvent to escape during reflow. This caused voids under the Kovar tab and poor solder fillets on the edge of the Kovar tab during reflow. During a visit to Plexus this problem was described to Photo Stencil. The Photo Stencil team worked closely with the process engineers at Plexus to design several test stencil apertures in an attempt to solve the outgassing problem that was causing the defective fillets and solder voids. Photo Stencil utilized its experience in two areas to resolve the problem. (1) AccuScreen aperture design, which employs a honeycomb type aperture structure. (2) Experience with ground plane aperture designs for QFN stencil printing.

AccuScreen is a hybrid electroformed stencil. The squeegee printing surface is perfectly flat compared to woven wire knuckles for woven screen mesh products. This flat, electroformed structure is stable and does not stretch during usage like woven wire mesh.

With an AccuScreen, a variety of mesh patterns, such as rectangles, squares, circles, ovals, and a hexagon mesh shape, which eliminates mesh angle variations seen in woven mesh products, is available. Because AccuScreens are durable and chemically resistant, they can be used with a wide variety of materials. They can be used for multiple applications in the semiconductor industry, such as flux printing for ball attach, where the mesh pattern shape adjusts to material flow and viscosity requirements, giving greater print deposit uniformity and higher printing yields. In the solar industry, they can be used for printing very narrow lines for finger widths of 50 microns and lower.

Once the AccuScreen design was selected, Photo Stencil drew on its experience with printing solder paste for quad flatpack no-lead (QFN) devices. QFNs present several assembly problems. QFNs have a metal pad on the underside of the part for grounding and heat conduction. The packages are very small and light. The QFN leads and ground plane conductor are flat and in the same plane on the bottom of the package. Printing solder paste 1-1 with the ground plane can cause the QFN to floatduring reflow, thus miss-registering the leads on the QFN and the pads on the PCB.

Photo Stencil engineers have found that QFN float can be controlled by reducing the amount of solder paste printed on the ground plane. Typically a 50 to 60% reduction will solve the QFN float problem. However, the aperture reduction must be done judiciously. A window pane aperture is recommended for most cases. This allows the solder paste volatiles to easily escape during reflow without moving the QFN device.

“We had set extremely high standards because the fillet of the solder on this part needed to be perfect,” said Travis Tanner, CIM/CAM tech Sr., Plexus Manufacturing Solutions. “We had tried many stencils and made many plots, but they all resulted in failures. When I was talking to Bill Coleman, VP of technology at Photo Stencil, he happened to ask if we had any issues with anything, and I shared the problem with him. As he started to define a solution, we brought our engineering team into the discussions.”

After discussions with Plexus engineers regarding this challenge, the Photo Stencil team felt that by using an adaptation of an AccuScreen stencil they could create a uniquely designed stencil with a honey-comb aperture pattern that would evenly dispense the solder paste and allow for outgassing during reflow, providing a uniform solder fillet around the Kovar tab. The apertures would be 6-sided and arranged in an array.

“Photo Stencil’s capabilities include chemical etching, high-end laser cutting, electroforming, and plating, along with an in-house print lab, internal testing, a deep knowledge of applications accompanied by application support, and a wide variety of products,” explained Rachel Short, VP sales. “Internally there was very close cooperation between our CAD stencil designers and our experienced stencil and SMT assembly application engineers in designing the test stencils, so we were able to deliver a customized product suited specifically for this application. We also were fortunate to be working with the excellent team at Plexus. Plexus has a drive and focus to stay ahead of the industry, fit customer requirements, and to continually look at better ways to do things.”

This modified AccuScreen stencil gave Plexus a print process that is stable and consistent through the life of the stencil.

“After the theory-application sessions, we went through multiple arrangements of the design,” said Travis Tanner, CIM/CAM tech Sr., Plexus Manufacturing Solutions. “Several stencils were made and tried, changing the foil, the spoke width, aperture spacing, etc. and ultimately we achieved a successful stencil design. This was something the previous builder of the product was unable to do.”